Are you looking for an affordable mobile home to rent by the river in a 3 star campsite near Mâcon ? The KanÔpée Village invites you to get away from it all and reconnect with nature in a preserved setting only 40 minutes by car from Mâcon. 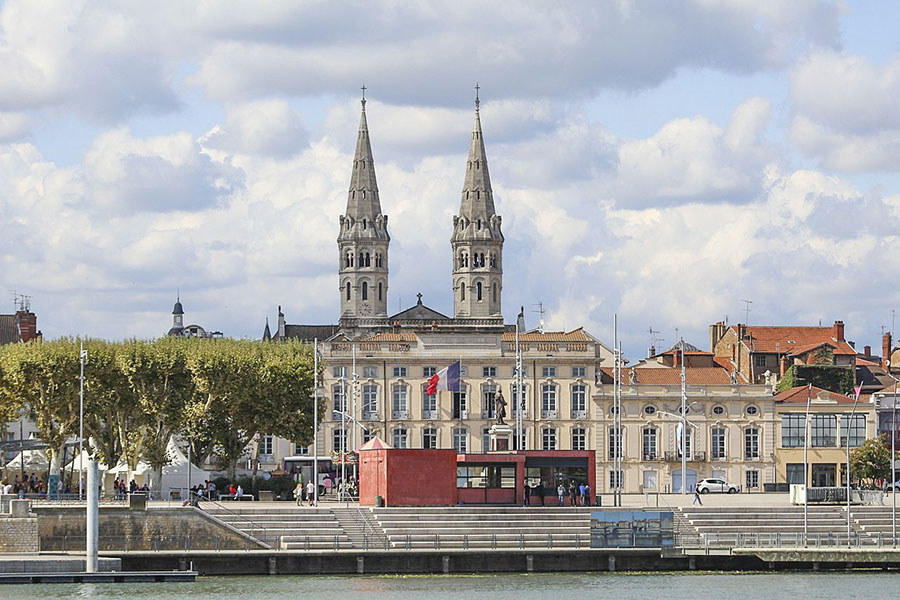 Situated north of Lyon and well served by the A6 motorway, the town of Mâcon was built on the banks of the Saône, between the Beaujolais and Bresse regions. The prefecture of Saône-et-Loire, one of the largest cities in Bourgogne-Franche-Comté, is surrounded by vineyards and green hills that remind us of its proximity to the Jura and the Massif Central. The city has the advantage of being on a human scale (33,500 inhabitants), combining the advantages of the city without the disadvantages of large metropolises.

Mâcon is distinguished by the Saint Laurent bridge over the Saône, the Saint-Vincent cathedral, the former Ursuline convent transformed into a museum and the Cordeliers convent. The city centre boasts dozens of beautiful buildings, 24 of which are classified as historical monuments, including the Senecé Hotel. If you like the local heritage, take the time to make a diversion to the Saint-Clément Church, whose construction began in the 6th century.

Located in the heart of nature, the city attaches particular importance to its parks and gardens, which cover an area of 6,000 m2. The “Vallon des Rigolettes” and the St. Nicholas meadow are particularly popular with walkers and sports enthusiasts.

Top 5 things to do in Mâcon 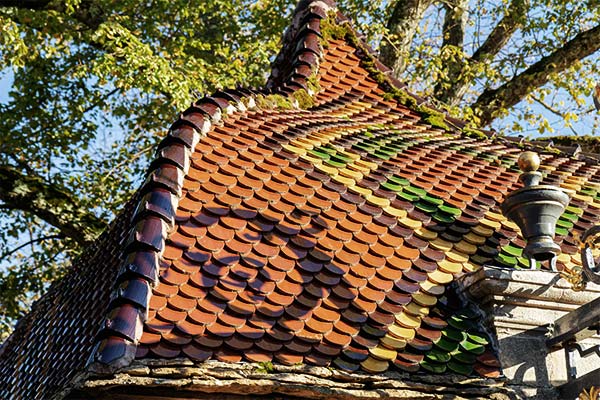 Would you like to discover Mâcon and its region? The KanÔpée Village is the ideal campsite near Mâcon for a comfortable stay at a reduced price between the Auvergne-Rhône-Alpes and Bourgogne-Franche-Comté regions. Our 3-star campsite is open all year round and has fully equipped camping & caravanning pitches and rental accommodation for 4 to 11 people. By staying at our Mâcon campsite, you can enjoy the comfort of prestigious accommodation and free access to all our facilities (+ the leisure centre with water park located close to the campsite). 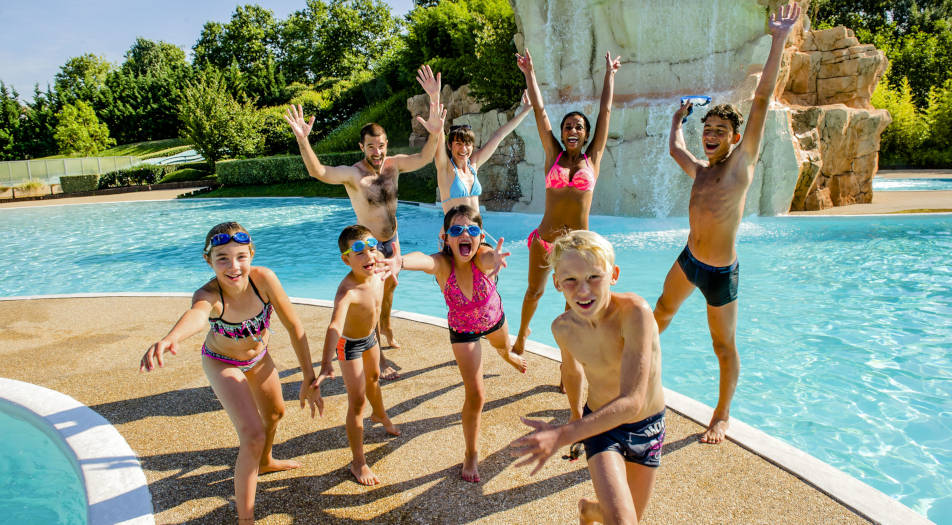 Did you say camping with swimming pool in Mâcon? Be more ambitious, ask us for a heated water park with several pools and slides! If you plan to book prestigious accommodation or a pitch at KanÔpée Village, you will have free access to the water park Les Cascades for the duration of your stay. Situated just a stone’s throw from the campsite, this fabulous 1,800 m2 water complex has been laid out in a 2.5 hectare green area.

It includes several heated pools that resemble lagoons, a 40-metre long turning slide, pentaglide slides (7 tracks), a paddling pool, a running river and a waterfall. Les Cascades is also a leisure centre where you can challenge your children or friends to volleyball and table tennis.

Do your children splash about for hours in the paddling pool ? They can’t get tired of hurtling down the slides and diving into the pool heated to 24ºC? You now have carte blanche for your water polo match, swimming lengths, aquagym lessons or diving lessons.

Would you like to refresh yourself, have fun and relax for hours in our water park? The KanÔpée Village is the campsite near Mâcon with a swimming pool designed for your family. 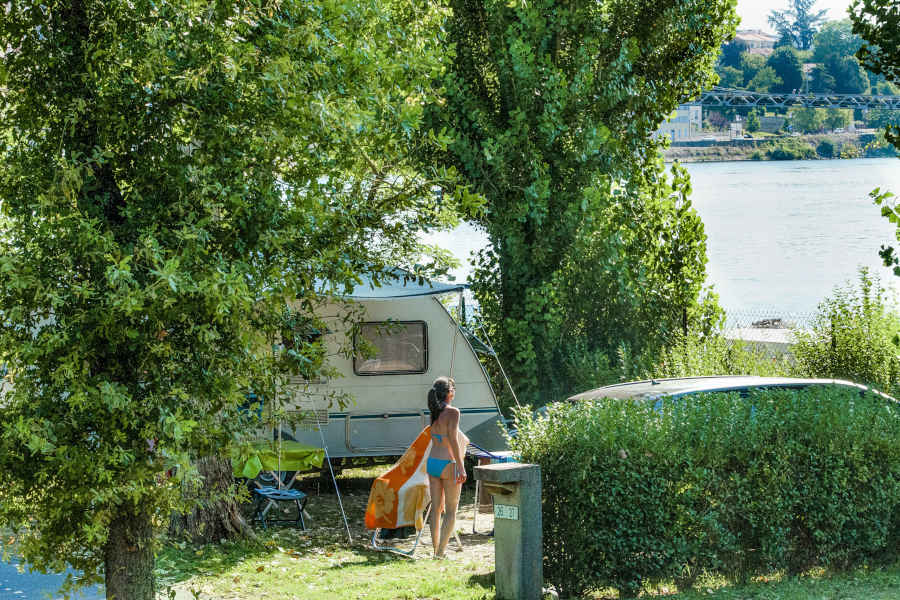 Are you planning to rent a mobile home near Mâcon in Saône-et-Loire to explore Auvergne-Rhône-Alpes and Bourgogne-Franche-Comté regions? The KanÔpée Village is the ideal base for exploring the Saint-Vincent de Mâcon Cathedral.

Our open-air hotel offers recently built mobile homes for 4 to 11 people from 34 to 40 m2. Our prestigious accommodation is especially aimed at families and groups who want to spend a comfortable and intimate stay on a campsite near Mâcon at the best price.

All our rentals units have a large, bright living room with sitting area and equipped kitchen, 2 or 3 separate bedrooms, a bathroom, seperate WC and a wooden terrace with garden furniture. You will appreciate their modern finish, their storage spaces, their contemporary decor, their quality equipment (television, heating, crockery and kitchen utensils) and their intelligent layout for an optimisation of space.

Do you like unusual rentals ? Our campsite near Mâcon has selected two of them: a small mobile caravan of 3 m2 for couples, and a magnificent wooden chalet on stilts which can accommodate up to 11 people.

Do you prefer traditional camping to luxury rentals? Book a camping pitch near Mâcon at KanÔpée Village! Our camping and caravanning sites are located in a peaceful area of the estate, close to the sanitary blocks, and have a surface area of 80 to 200 m2.

They can accommodate your tent, caravan or motor home, as well as another vehicle. They are covered with lawn and delimited by natural hedges to better preserve your privacy. Our optional services (electricity, water point) and our various packages allow each purist to choose the personalised formula and the degree of comfort they desire at the best price when booking their camping pitch near Mâcon. 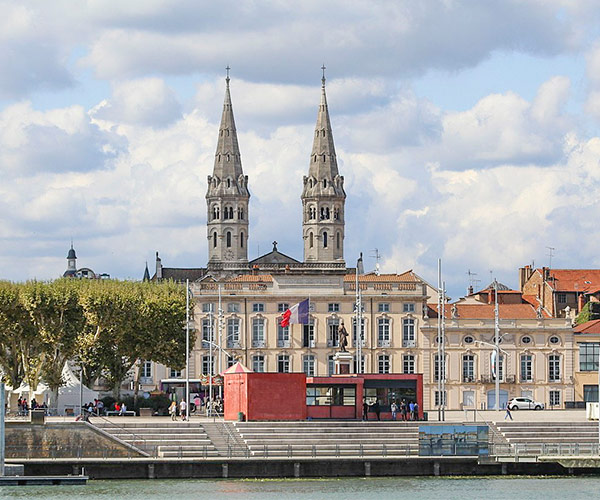 The most beautiful cities around the campsite