A luxury campsite in the spirit of nature close to Lyon

Nature is a luxury within everyone’s reach.

Welcome to KanÔpée Village, an outdoor hotel, full of, located in the Ain only 20 kilometers from Lyon in Rhône-Alpres.

Open all year round, our campsite near Lyon immerses you in a natural setting, with an exceptional panorama between the banks of the Saône and the beautiful city of Trévoux deserving of its beautiful labels :

The camping Lyon is an ideal destination for a return to your roots, a comfortable stay for a romantic getaway in couple or an unusual stay with family or friends.
Located near the Lyon metropolis with Clermont-Ferrand, Switzerland and the French Riviera, our establishment is particularly adapted to holidaymakers looking for a change of scenery for a long stay or a stopover on their way to their vacations.

Family campsite in Trévoux, in the Lyon region

Our camping Ain 3 stars holds several labels certifying the quality of our services (Green Key, Tourism Quality) which guarantee our visitors a 100% relaxing getaway in a family campsite with access to the water park of the Cascades. Open from weekends and Wednesday afternoons in June and every day in July/August, you will enjoy more than 1800m² of pools with heated pools, slides, pentagliss…

Our rentals, very appreciated by our guests, upscale, recent, contemporary and fully equipped, welcome you all year round. Our spacious pitches that can accommodate your caravan, camper, tent or boat are available from April 1st to September 30th. The river stop is open all year round for mooring pleasure boats.

You will be able to discover a nature destination labelled Station Verte, on foot, by bike or by canoe, take advantage of water bodies offering safe swimming and leisure activities, or prefer to stroll in the former capital of the Principality of Dombes, recognized “Pays d’Art et d’Histoire”. 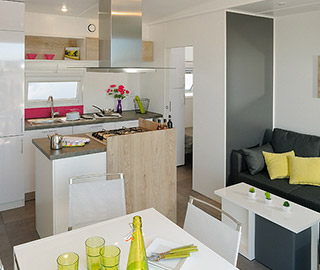 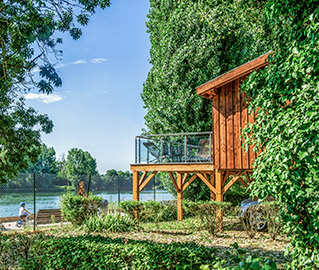 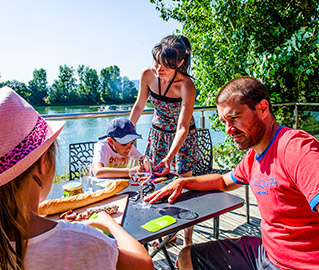 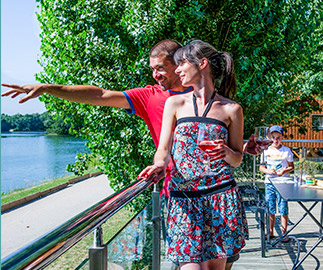 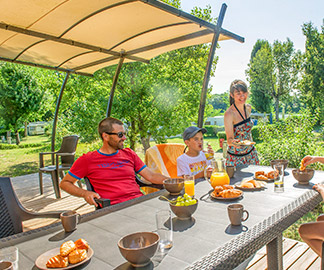 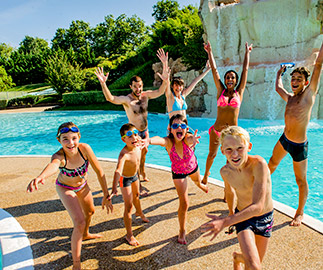 Discover our camping accommodations near Lyon 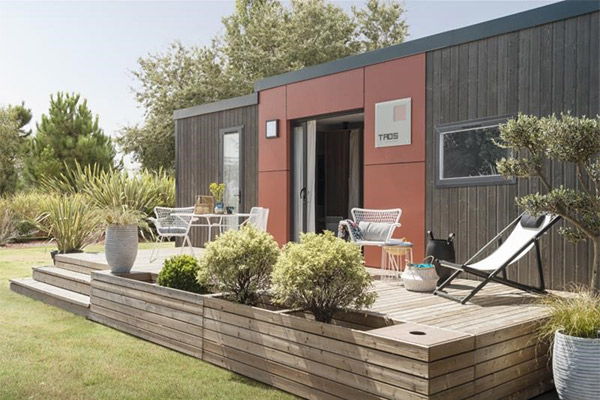 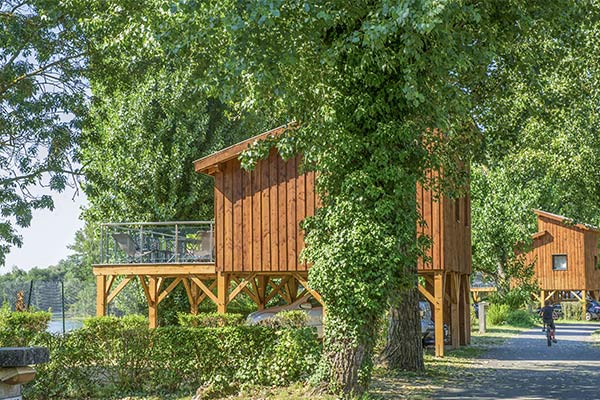 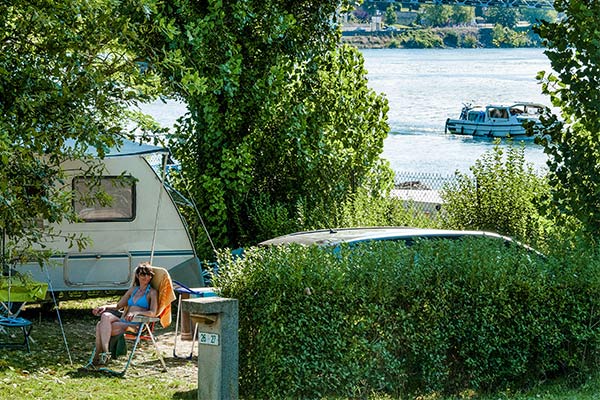 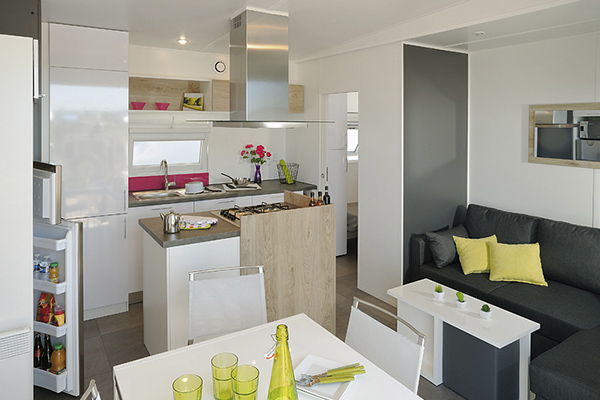 Rental of mobile homes, chalets and pitches near Lyon

Want to reconnect with nature in a campsite in the Rhône-Alpes region? Book your mobil-home rental or chalet in Ain at KanÔpée Village!
Our campsite near Lyon offers you mobile home rentals, unusual accommodations like our Caravan “My Drop” for 2 people, chalets on stilts and fully equipped lodges for 4 to 11 people.

Our luxury rentals are for families and groups of friends who want to enjoy both the luxury of a vacation home and the green setting of a campsite near the Dombes and Bresse.
Take the time to discover our selection prestige accommodation and select the one that will make your stay unforgettable in camping Lyon cheap !

Discover also our different pitches at your disposal at the campsite.

5 good reasons to come to the campsite

A BEAUTIFUL PARK
AQUATICS
Open weekends in June
and 7 days a week in July/August.

QUALITY ACCOMMODATIONS
INSOLITIES
From 2 to 3 rooms and unusual.

EXCEPTIONAL PANORAMA
ON THE EDGE OF THE SAÔNE
visible all year round with its different charms
depending on the season.

OINGT AND PEROUGES
ranked among the 100 most beautiful villages in France.

CLOSE TO THE
ROAD BICYCLE 50
Numerous routes to discover
by bike.

Vacations with your feet in the water near Lyon

What would you say to take your breakfast on your private terrace with view on the Saône river in a family campsite located in the former capital of the principality of Dombes in Rhône-Alpes?
Located in bord de Saône and a few minutes from ponds, our campsite near Lyon is an invitation to recharge your batteries in a green setting. Strolls on the banks of the Saône, swimming in fresh water, fishing.

You dream of a camping in the Ain with swimming poolto enjoy the joys of swimming with your family? Our campsite invites you to go through the gates of the Cascades de Trévoux, a fabulous aquatic area with heated swimming pool, slides, water jets and waterfall close to the campsite. This water park is the favorite gathering place for children during their stay in camping in Trévoux. Come and discover by yourself why KanÔpée Village is one of the best campsites near Lyon!

Enjoy a unique setting and environment near Lyon in the Rhônes-Alpes region.

Our campsite north of Lyon with sports activities will particularly appeal to sportsmen and nature lovers. Swimming, swimming, fishing, hiking, golf: live authentic experiences in our campsite near Lyon.

At KanÔpée Village, you will spend active vacations in a campsite close to Lyon which offers an excellent quality/price ratio. Discover the wide range of sports activities that await you during your next camping vacation in the capital of the Gauls.

Do you want to spend your next holidays in a green natural setting and preserved in an Aindinois campsite? Are you looking for a campsite near Lyon to recharge your batteries for a night or two before heading to the French Riviera?

Invite your friends for a sports weekend camping in Trévoux near Lyon! KanÔpée Village offers fully equipped accommodation, pitches and facilities adapted to the needs of all visitors. 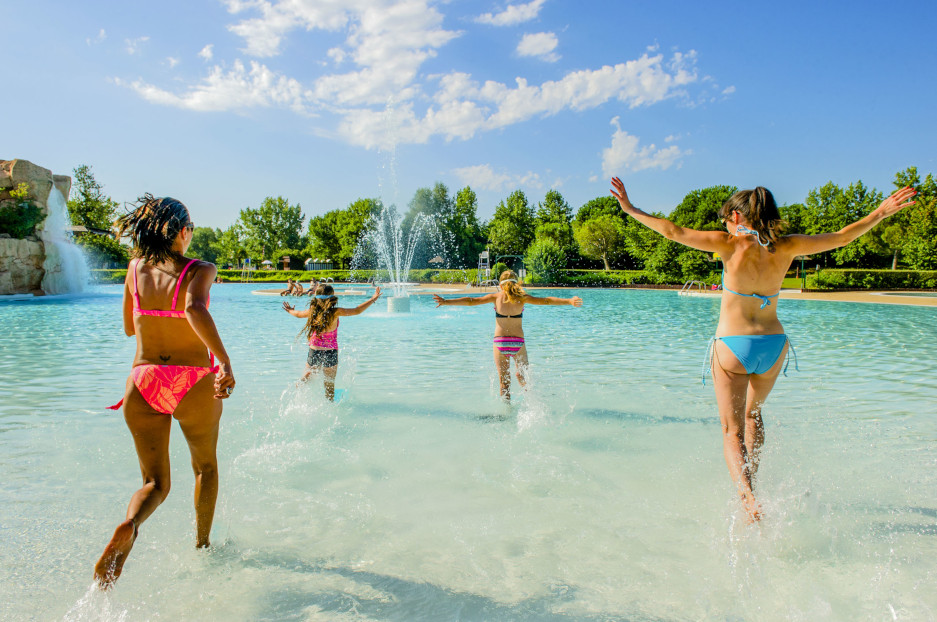 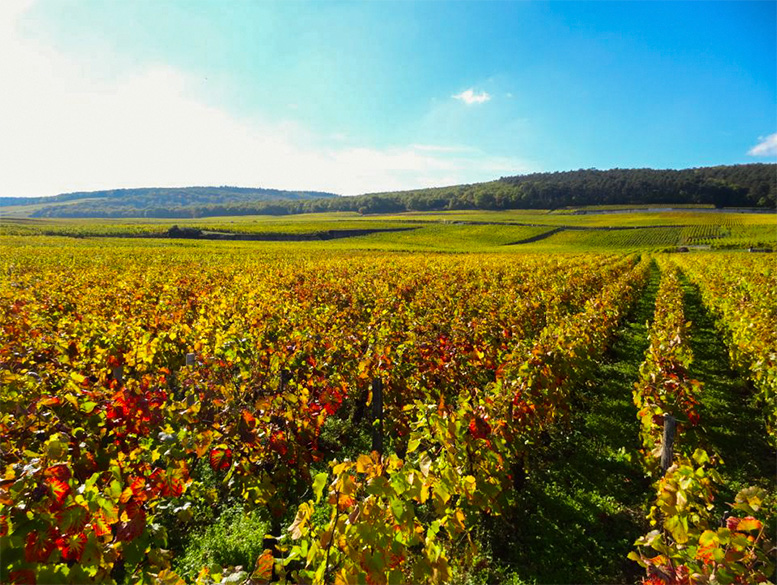 Route of the sun 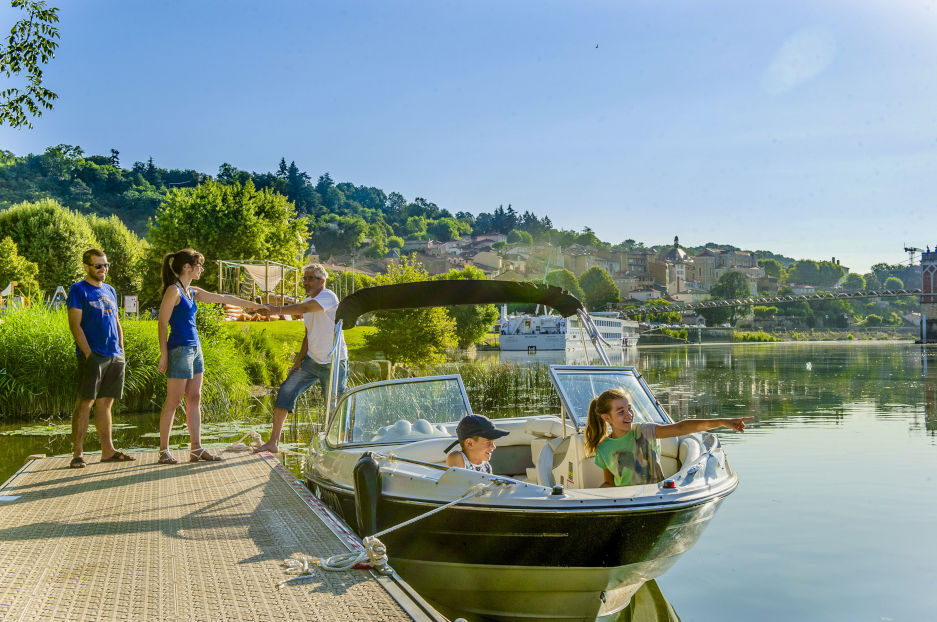 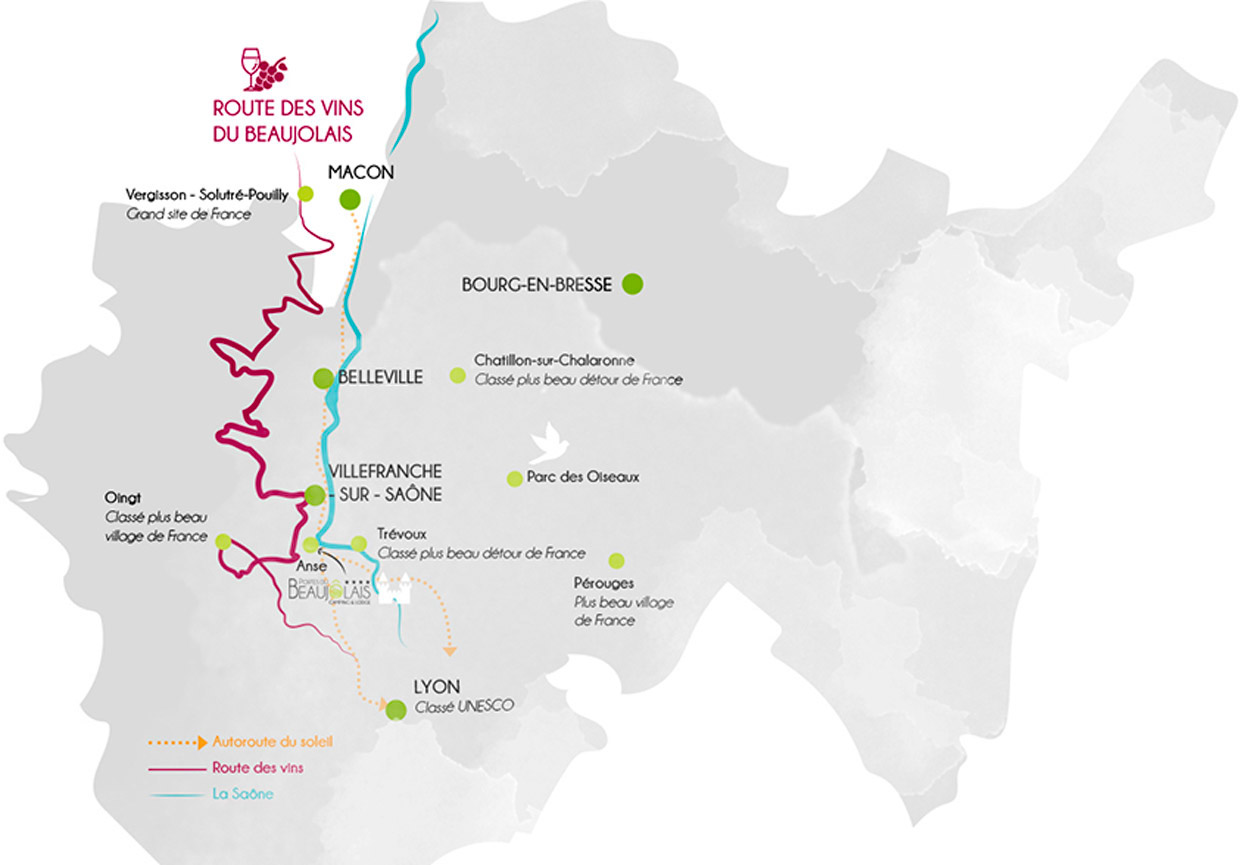 Visit the Lyon region from the campsite

From our campsite in the Ain, you can sail or bike on the banks of the Saône, visit the Ain and the Burgundy and fish in the ponds of the Dombes, the country of a thousand ponds. Discover also from the campsite the town of Villefranche-sur-Saône.

You can also quickly reach Oingt and Pérouges, two villages around Lyon classified among the most beautiful villages of France from our campsite near Lyon in Rhône-Alpes. Ask at the reception desk as soon as you arrive at our campsite near Mâcon to plan your visits as well as possible.

We will have at heart of you offering the Pass Privilège which will allow you to get up to 1 paid entry = 1 free entry, as well as a diary listing 25 days of tours.

Make savings by benefiting from free entries, discounts and VIP advantages at more than 60 partners with the PASS ATOUT! This pass, valid for the duration of your stay, is free and allows you to benefit from all the advantages.

Places not to be missed around the campsite

YOUR CAMPSITE AT THE GATES OF LYON: What to see and what to do?

Welcome to the KanÔpée Village, a family campsite located in a natural setting, a few minutes drive from Lyon by the A6 freeway. The prefecture of the Auvergne-Rhône-Alpes region, whose historic heart is listed in the Unesco world heritage site, is home to remarkable monuments such as the cathedral Saint-Jean, the basilica Notre-Dame de Fourvière and the Palais de la Bourse.

Capital of Gones, take advantage of your stay to discover or rediscover the atmosphere of a soccer stadium, the Groupama Stadium and a mythical team, 7 times consecutive French champions, from 2002 to 2008.

Soak up the atmosphere of the emblematic districts of the center of Lyon such as La Croix-Rousse and photograph the city hall on the magnificent place des Terreaux, located at the bottom of the hill. Built at the confluence of two rivers, the cité lyonnaise is suitable for walks or bike rides on the banks of the Rhône or Saône rivers in love in Lyon.

Play adventurers without the traboules and relax in the Tête d’Or park before visiting the Museum of Fine Arts or the Lyon zoo, the second oldest zoological park in France. 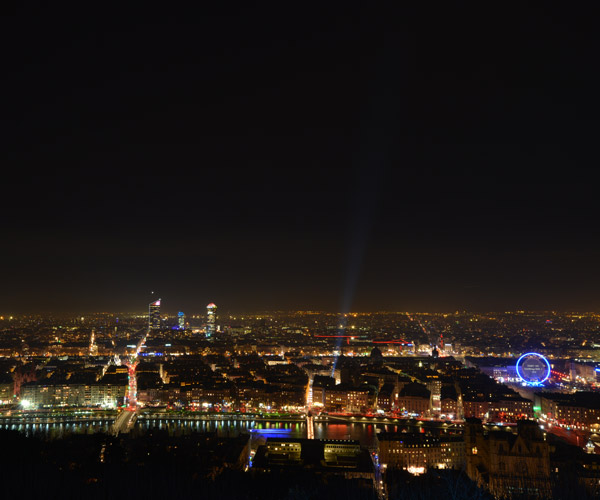 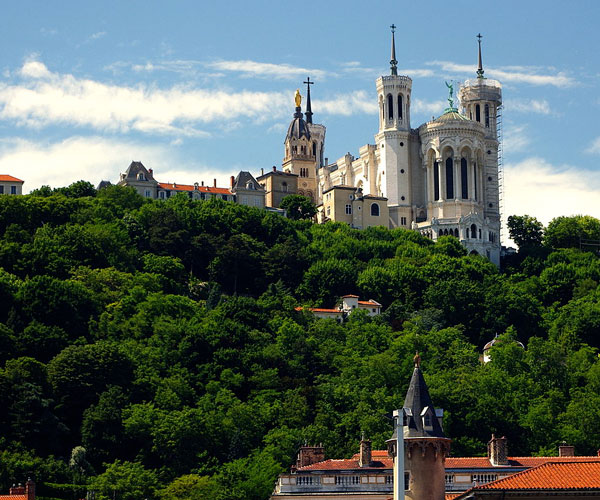 The opinions of our customers
Very pleasant campsite. It is calm and restful. Ideal for our family who wish to rest while visiting the surroundings of Lyon. The water park around the campsite is ideal for swimming. Our mobile home was also perfect! Nadine
★★★★★
Trévoux is a very beautiful city. The location of the campsite next to the children's playground along the Saône is a plus. As well as the possibility to rent bicycles at the campsite to walk along the Saône. And we are less than 30 minutes from the Parc aux Oiseaux in Villars les Dombes. Superb moment with the children. I highly recommend. Christine
★★★★★
The reception, nothing to say about it! Véronique is great, reactive and takes great care of her guests... Trévoux is a superb city. And a lot of activities to do there. We liked the view from the chalet which was for us well placed. A very warm welcome... Laetitia
★★★★★